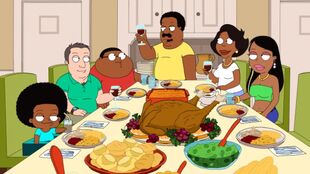 Another year, another Thanksgiving.

A General Thanksgiving Episode
When Holt misses his plane for Thanksgiving, he reveals that he wasn’t even invited to his estranged family’s holiday dinner.


Plot: Holt misses his flight for Thanksgiving but reveals he was going to an Entourage event rather than his family's celebrations because they didn't want him with them. The guys try to get a drink at the bar, but find there is no bar to be seen at the airport. Stewing back at the Stool, Cleveland talks Gus into opening a second bar at the airport. 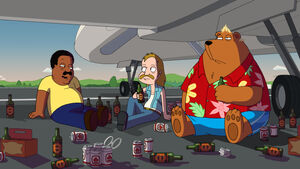 Meanwhile, Donna asks Cleveland to watch Rallo but he passes him off to Holt. After Holt tells him of his troubles, Rallo helps Holt score a date and Holt realizes that Rallo is his key to chicks. As Holt pays Rallo in order to pose as his Big Brother mentor he scores big. As they hang out together, Holt opens up and reveals that his father hasn't had much to do with him which gives Rallo and idea. Rallo arranges for Holt's father to visit him and finds he is a strict military man who makes them do push ups.

As the guys open The Broken Stool No. 2, they find the airport is overloaded with other bars they didn't recognize as bars due to their fancy names and decor. Gus tells Cleveland to make the bar work or else he'll cut off his nose. As the guys worry about their fate, they get drunk and Cleveland finds an airplane with the keys inside and takes off. As he is in flight, he starts to run out of fuel and is in danger of crashing. 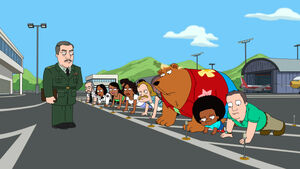 After General Richter finds out that Rallo lied to get him there he starts to leave, but Rallo thanks him for his military service and he agrees to stay for Thanksgiving dinner. Over dinner they get word of Cleveland's predicament and go to the airport. Holt volunteers to jump out of a plane flown by his father on a harness to catch Cleveland in mid-flight. Using the way to ride swings taught by Rallo, he gets Cleveland to safety. Back at the airport, Gus reveals that his niece who needed his life savings has passed away so he no longer has a pressing need for the money. General Richter reveals that the reason he is estranged from his son is that he is disappointed that Holt was too short to join the military. Holt tells off his father and leaves with Rallo.

Retrieved from "https://cleveland.fandom.com/wiki/A_General_Thanksgiving_Episode?oldid=24538"
Community content is available under CC-BY-SA unless otherwise noted.