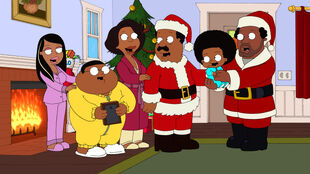 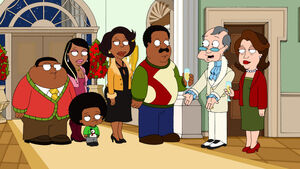 Cleveland and the family go to pick out a Christmas tree at Lester's lot. Cleveland has his eye on a nice large tree but Rallo insists on a smaller tree. Cleveland finds out that Donna and the family have been lying to Rallo, telling him the reason Robert can't come around during the holidays is that he is an FBI agent. When Cleveland fills in as Santa Claus at his office holiday party, he has one too many egg nogs and lets the truth slip about Rallo’s father. Rallo fails to connect that it was Cleveland posing as Santa and takes out his hostility on figures of Santa. With Rallo’s admiration for his dad destroyed, Cleveland tries to reconnect father and son in an attempt to save Rallo’s Christmas spirit. He finds Robert at SKANXXX a strip club. Robert doesn't care at first but later has a change of heart. He shows up at the house dressed as Santa and tells Rallo another lie...he hasn't been around because he is the real Santa, making Rallo's Christmas a happy one.

Meanwhile, Roberta becomes an animal rights activist and tries to save a reindeer. When she sets it free, it goes on a rampage.