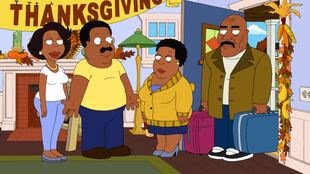 
Plot: Cleveland celebrates his first Thanksgiving with his new family. His parents, Evelyn Brown and Levar 'Freight Train' Brown arrive for Thanksgiving. Cleveland's dismal relationship with his father nearly lands him in a fight with his own father, until Donna's Auntie Momma shows up. She starts making comments on how outrageous she is after farting. Freight Train gains an infatuation over Auntie Momma and decides to have sex with her after a game of football. However, when Cleveland was taking out the garbage, he saw Auntie Momma in the bathroom, with a penis. Despite that Freight Train had sex with Auntie Momma (who secretly is a man), he didn't even know about it. While they show constant sexual innuendo at the dinner table, Cleveland vomits repeatedly. When Cleveland decides to confront Auntie Momma in private, she admits that she is a man. 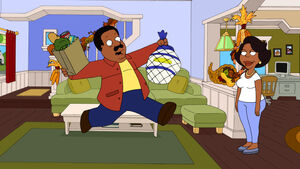 When she leaves, Cleveland decides to have a discussion with his father. When he discovers that he had sex with a man, he starts to vomit similar to Cleveland. Cleveland persuades Freight Train to stop bickering with his wife and treat her like one.