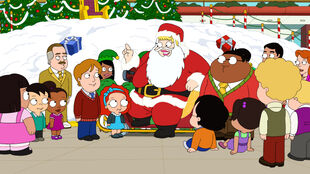 'Tis the Cleveland to be Sorry
Cleveland fakes being homeless for gourmet food. 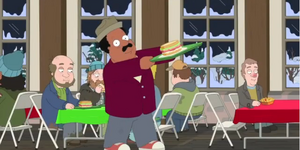 When the kids make their Christmas lists, Donna insists that they help by donating old goods. Roberta refuses and insists on getting a job to buy her own gifts. While helping out at the mission, Cleveland finds that the residents eat better food than he gets at home and decides to pass himself off as homeless, telling Donna that he is volunteering at the shelter. He succeeds despite being recognized by Tim and makes the acquaintance of several of the residents where he spins a wild yarn about how he got into his predicament. They help him out and take him under their wings. Cleveland finds that Donna nominated his as a special angel due to his work at the shelter and his con job is exposed on television. Cleveland becomes a pariah in town and tries to publicly apologize but makes things worse. As he wanders back to the shelter, he finds that the residents still accept him but the food has returned to the usual low standards. He sets off with the residents to make others aware of the situation at Grundle's.

At Grundle's Department Store, Roberta gets hired as a skimply-dressed elf and Kendra demands to get upgraded from Mrs. Claus to the role of Santa but is passed over in favor of Arch. Kendra finds a sympathetic ear in Roberta but when she points her to a job as Santa at a laundromat, Kendra turns her down, wanting the job at Grundle's. Arch uses his regular charm as Santa, telling the kids what they'll get regardless of what they want. Kendra recalls a special present Roberta once wanted and Roberta makes Kendra a special sleigh out of her scooter. But due to being depressed over not getting her dream job, Kendra gives up on Christmas.

When Arch bails on the job and the kids are left without gifts, Kendra gets back her Christmas spirit and takes on the challenge of providing Christmas although she has trouble getting to the store, sliding backwards into the snow and losing the Christmas gifts in the process. Cleveland and the homeless find Kendra frozen in the snow and help her get to the store. Roberta and her co-workers complain about continuing to have to wear their costumes and quit, tossing Mr. Grundle their shorts. Without the presents, Kendra tells the kids at the store to help themselves to the store goods, figuring that they can't all be arrested. Cleveland tries to apologize again but points out that everyone ignores the homeless after the holidays and strikes a chord, making Donna happy.

Previous Episode /// 'Tis the Cleveland to be Sorry \\\ Next Episode

Retrieved from "https://cleveland.fandom.com/wiki/%27Tis_the_Cleveland_to_be_Sorry?oldid=30160"
Community content is available under CC-BY-SA unless otherwise noted.