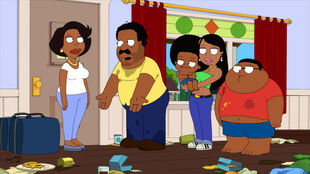 'Til Deaf
Cleveland must come up with a clever way to sneak off with his buddies on a hunting trip. 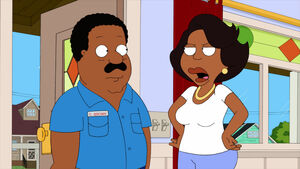 Donna has a midlife crisis and becomes an emotional wreck, leaving Cleveland to his own devices. Worried about leaving her for a weekend hunting trip, Cleveland must come up with a clever way to sneak off with his buddies without her finding out. As he tries to slip the idea past her she refuses to let him, so he lies about going out. But when a hunting accident leaves Cleveland slightly deaf, Dr. Fist tells him that he'll be deaf for a week, leaving him to worry about how to deal with Donna. He tries to fake his way and discovers the only three phrases a man needs to fool a woman and continues even after his hearing returns. But his scheme to agree to all of Donna's ideas backfires when she sells all of his valuables and moves to Florida to go to the University of Miami.

Cleveland decides to drive to Florida to catch up with Donna where he admits his duplicity. Donna is satisfied at first that she accomplished her goals of going back to school but when Cleveland tries to shoot her down, she tells him it's not going all about him anymore and stays in school. Back home two weeks later, Donna returns to find the family living in filth. She agrees to stay home but will attend a local community college to continue her dream. 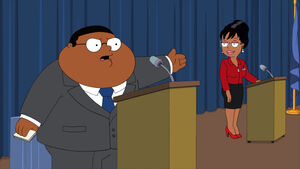 Meanwhile, Junior is up for an easy reelection as Student Body President, until Roberta gets irritated with him throwing his weight around while she and Federline make out at lunch and decides to run against him, drawing massive support from the fellow students. Junior decides to enlist Rallo's help to get him reelected again and tells him to involve any dirty tricks necessary.

After the election, a nervous Junior finds out that Rallo stole all of Roberta's votes and he panics upon realizing just how suspicious that looks. Rallo tries to follow orders to return some of the votes to Principal Wally's office but gets caught and agrees to turn over Junior. However, when Roberta is declared the winner she promptly resigns having proven her point, and Wally hands the presidency back to Junior when no one else wants it.

Previous Episode /// 'Til Deaf \\\ Next Episode